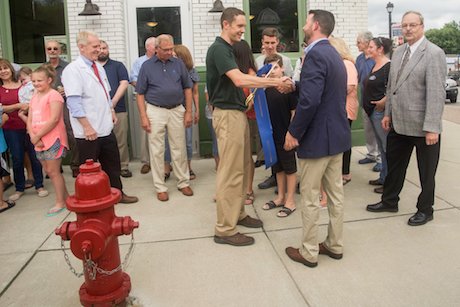 Attica Pharmacy is open for business

When Ryan LaVarnway was a child, 2 Market St., Attica, was Jim’s Deli and a general store. On Friday the Wyoming County Chamber of Commerce welcomed LaVarnway, owner of Attica Pharmacy, to the address with a ribbon-cutting ceremony.

Local dignitaries, family and friends gathered at the corner of Market and Main streets to celebrate the official opening of Attica’s new independent pharmacy. The last time residents of the village and surrounding town had the option of pharmacies was in 1996 when Burling Drug closed its doors.

“I had worked for Walgreens for 15 years and decided I didn’t want to be a staff pharmacist,” LaVarnway said. “I didn’t want to have to uproot my family to move up the corporate ladder.”

So, about four years ago he opened up his first pharmacy in Hamburg – a purchase he made from David Brooks.

“Before I bought Brooks’ I thought about opening the pharmacy here, in this same building I’m in now, but it wasn’t doable at the time. But the real cool coincidence was in buying the store in Hamburg, the Brooks family used to live in this area.”

The brick building that sits kitty-corner from the pharmacy was called the Duoform Company – a manufacturer of home remedies and medicines during the 1800s. David’s grandfather, Sewell Brooks, built the building. David’s father, Chester, was a pharmacist at a shop in the village. Sometime during the 1940s Chester moved his family to Hamburg to open up his own store – Brooks Pharmacy.

During the 1970s, David had taken over the pharmacy and in 2013 sold it to LaVarnway. While he still owns the shop in Hamburg, a couple of years ago he felt he could finally take the leap of bringing an independent pharmacy back to Attica. But he had a lot of work to accomplish first.

“It’s totally different starting from new. There is a lot more involved in the process of starting a business from scratch.”

Licensing had to be obtained, a computer system needed to be installed and the building itself needed a bit of work.

“The building was a bank in the '60s and then sold to a store owner who had moved the door a few feet to the right, more in the center of the space. I wanted to make the front look like the old bank building.”

He not only renovated the interior, he restored the entrance back to its original facade – projects that were almost a year in the making. He also retained all the original woodwork and even repurposed an old door that he found in the basement that was labeled for the employee lunch room.

“This is my hometown. I saw a big need. The community hadn’t had a choice in pharmacies for 20-plus years. It’s a great community to open up in. To have done it on my own is rewarding, but the best part is seeing the people come in and the positive response of the customers.”

Attica Pharmacy leans toward a more traditional pharmacy in the sense that it sells prescription drugs, over-the-counter medications and medical equipment. The shop has five employees: three pharmacists, of which LaVarnway is one, and a couple of part-time employees.