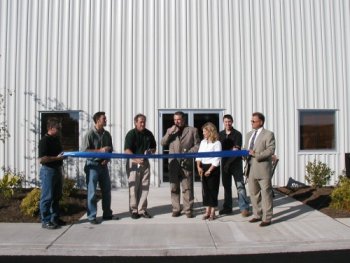 Wyoming County Chamber of Commerce officials were on hand to help celebrate the opening of one of Wyoming County’s newest companies, Empire Distributing.

“It was just over a year ago that the Chamber reached out to company officials regarding their expansion into Wyoming County,” stated Chamber Executive Director James Pierce.  The family owned company that distributes fireplaces, stoves and accessories had outgrown its Holland, NY location.  The Chamber and IDA assisted the company with an expansion project on Rt. 98 in Arcade.  In April 2006 the company broke ground on its new 75,000 sq. foot building and completed the project by May 2007.  The additional space provided as a result of the expansion will allow Empire Distributing to add other lines of product and expand its market.

“Wyoming County is fortunate to have a company such as Empire Distributing making this type of investment in the county.  We are pleased to welcome them,” stated Pierce.  ï¿½Their project has helped to retain 13 jobs in the area and will create 7-10 new jobs over the next three years, continued Pierce.”

According to Mike Rupp of Empire Distributing, “Out of all the areas that we looked at to expand our business, the town of Arcade seemed to offer the most as regards to available land and possible railroad siding facilities.  The piece of property purchased is also large enough for future expansion.  Being from the area, we are familiar with many of the local businesses and so many of the residents have already been some of our long time customers.  It seemed to be the right thing to do to call Arcade the new home of Empire Distributing.”