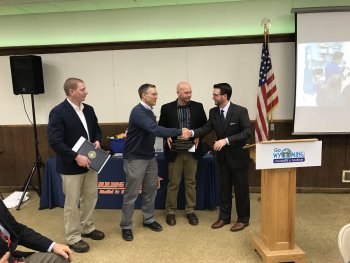 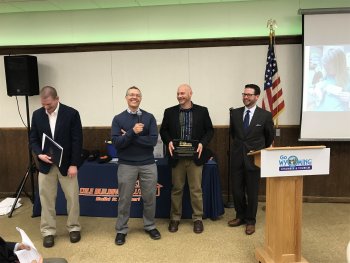 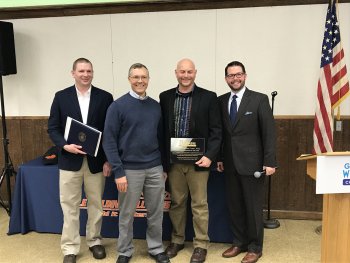 The Wyoming County Chamber & Tourism was pleased to announce that Perry Veterinary Clinic, PLLC, located at 3180 Route 246, Perry, NY, as the 2018 Agri-Business of the Year. The annual award was presented at the Pride of Agriculture Dinner on Saturday, March 3, 2018 at the North Java Fire Hall.

The event was once again emceed by Jeff Fitch, who entertained the 300 guests in attendance at the annual event. Special guests this year included New York Lieutenant Governor Kathy Hochul and husband Bill. Lt. Governor Hochul addressed the crowd and spoke before dinner. Congressman Chris Collins also visited and spoke to the capacity crowd.

“We are very pleased to give the Agri-Business Award to Perry Vet Clinic for its continued growth and service to Wyoming County and the larger regional community,” said Chamber President, Scott Gardner. “This business has continued to flourish since its earliest founding almost 100 hundred years ago. Perry Vet Clinic is an industry leader serving both the large and small animal populations. Even though they have continued to grow, they have never lost the personal touch and compassion for the clients and customers that they serve.”

The event also featured the presentation of the Pride of Agriculture - Good Neighbor Award which was presented to Broughton Diversified Farming, LLC and the Friend of Agriculture awards which was presented to Will & Louise Herrick, which are joint awards given by Cornell Cooperative Extension of Wyoming County and the Wyoming County Farm Bureau.  The awards are always kept a secret until the night of the dinner. 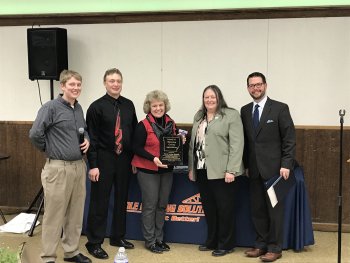 The Friend of Agriculture award was given to Will & Louise Herrick

Award Intro for Perry Veterinary Clinic:
Originally established in 1919 by Dr. F.C. Clark, this veterinary practice started in a garage on Covington Street in Perry and grew steadily through the 40’s, 50’s, and 60’s. By 1971 the Clinic outgrew its garage home and moved to its current location on Route 246, becoming the Perry Veterinary Clinic, which we honor this evening.
During the 1970’s , the dairy industry was growing and changing from small herds of 30–50 cows to larger herds of 100 or more, and with it the role of the dairy veterinarian evolved with advances in record keeping, sophisticated nutrition, artificial insemination and embryo transfer programs. With new facilities in place for its small animal practice, the Clinic also met the increasing expectations of local pet owners. To address both dairy industry growth and the needs of small animal clients the Clinic grew by three partners.
In the 1980’s small animal veterinary medicine continued to grow and facilities were updated as significant improvements were made to cardiology and EKG equipment, as well as ultrasound technology. In response to continued expansion in both the farm and small animal markets, three additional partners joined. The innovations in the 1980’s lay the groundwork for rapid expansion.
In March 1990, the partnership opened the first satellite clinic, the Animal Care Facility of Livonia. The new clinic allowed the firm to better serve both the dairy clients in Livingston County and the growing suburban population’s pet needs. Later that year, Dr. Patrick Lynch merged his practice with the Perry Veterinary Clinic, making it the largest veterinary clinic in the region. In 1991, recognizing the increasing demand for small animal service, the first full-time small animal practitioner and another partner was recruited.
In 1996, the Perry facility doubled in size, adding a modern treatment room, two surgical suites and full radiology capability for small animal patients. A large warehouse and retail store were added to accommodate the needs of farm clients.
In August 1997, the second satellite clinic in Yorkshire opened. This facility, like Livonia, recognized both the demand for small animal care and the expansion of the dairy industry and again, three more doctors joined the practice as partners.
In January 2011, a large animal vet was admitted to the partnership, as the geographic reach of the Large Animal Road Service continued to expand, serving clients in Niagara County eastward to Cayuga County. The Practice had been considering a 4th companion animal clinic, and purchased the Batavia Animal Hospital in September 2011.
From 2013-2015 the Perry facility expanded adding a 7,500 square foot warehouse to better serve the product needs of its dairy producers. There was also extensive remodeling of the former warehouse to include offices and a conference area to accommodate the increased number of employees. The treatment room was also refurbished allowing better service for small animal clients.
In January 2014, the practice added another partner and took on a new look. The practice rebranded itself with a new company logo, consolidated the four companion animal clinics under the name Perry Pet with a corresponding new logo, and developed a new logo for the large animal service and retail portions of the business under the name Perry Vet.
The Perry Veterinary Clinic is also actively engaged in the community and a strong supporter of the Chamber’s Leadership Wyoming program, and the Wyoming County Business Education Council. The business is also dedicated to assisting doctors of veterinary medicine and veterinary technician students thru externship and preceptorship programs. Perry Veterinary Clinic currently has over 100 employees across its practice, making it one of the county’s larger employers.
This business has continued to flourish since its earliest founding almost 100 hundred years ago because of diligence, planning, and hard-work. They are recognized nationally and beyond as trendsetters and have set the gold standard in their field. While they are an industry leader, and have continued to grow, they have never lost the personal touch and compassion for the clients and customers that they serve.
The annual agri-business award is given by the Wyoming County Chamber of Commerce to a business that exemplifies the following criteria: contributions to the economic vitality and quality of life of Wyoming County, capital investments, business expansions, job growth, community involvement, or for their contributions that strengthen their industry sector.