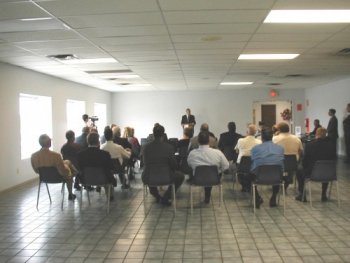 On his annual visit to Wyoming County, Senator Charles Schumer reached out to the Chamber for some ideas for his visit and the Chamber arranged to have approximately 30 local businesspeople and elected officials at American Classic Outfitters in Perry to meet with the Senator and tour the facility.

Before opening the floor for discussion the Senator addressed two issues important to Wyoming County that he is working diligently on.  The first is the Farm Bill, which will have significant effects on dairy farms as well as fruit and vegetable farms.  Within this bill the Senator is pushing for a “country of origin label” on meats.

He is also working hard to address what he views as one of the top issues for small counties across New York State, outdated water and sewer systems.  These systems and their facilities are old and many are in need of upgrades, which come at high costs.  These outdated systems also make it difficult for many counties to attract new manufacturer or new businesses.  The Senator recommended that if there are municipalities considering a water and sewer upgrade to do so now given the funding that is available through the Water Resources Development Act providing $4 billion in funding for water projects.

When opened to the floor, Larry Rogers, Supervisor of Pike, asked the Senator to discuss how the Farm Bill will address the issue of immigrant farm labor.  The Senator encouraged the group that the Farm Bill will not hurt local farmers ability to utilize immigrant labor to work their farms and that the Bill has overwhelming support from the New York State Farm Bureau.

Jim Fleischman, Supervisor of Java, raised his concerns related to tourism and the new regulations calling for all adults over age 16 to have a passport when traveling between the United States and Canada.  The Senator conveyed his lack of support for this believing it truly inhibits travel between Buffalo and Ontario.  He feels that a biometric driver’s license will solve the problem and alleviate the need for everyone crossing the border to have a passport.

Frank Vitagliano, Jr. of Tompkins Insurance asked the Senator to address the issue of the privatization of the IRS debt collection.  The Senator strongly supports the work of Pioneer Credit Recovery and will continue to work in their favor to see the contract stay in the hands of private debt collection companies like Pioneer Credit.

Numerous other issues were addressed including the Senators push to have all bridges in New York State inspected and held to the highest standards, as well as No Child Left Behind and programs to encourage young physicians to practice in underserved areas.